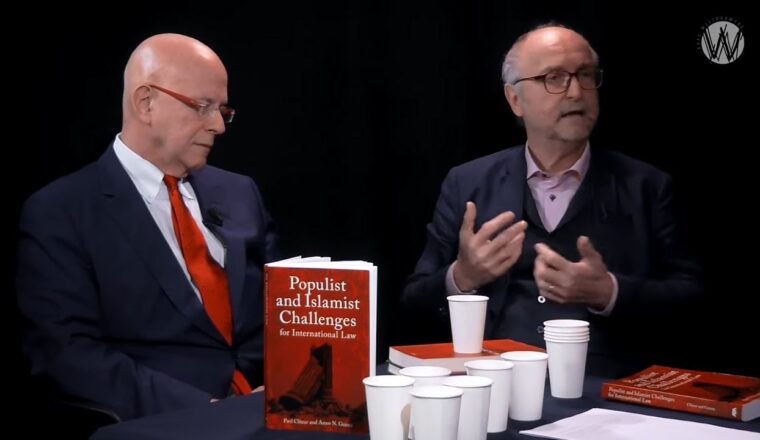 A special edition of Café Weltschmerz. Paul Cliteur and Amos N. Guiora discuss Islamism and right-wing populism. They worked together on a new book: Populist and Islamist Challenges to International Law (2019), in which they discuss the question: what is the most severe challenge right now? Islamism or right wing populism?.
Paul Cliteur is a Professor of Jurisprudence at Leiden University and a member of the Dutch Senate for Forum voor Democratie. Amos N. Guiora is a Professor of Law at the S.J. Quinney College of Law at the University of Utah.
Guiora sees the politics and the rhetoric of Donald Trump in the USA and Benjamin Netanyahu in Israel as divisive and potentially excluding whole segments of society as ‘The Other’. Cliteur sees a relationship between the populist challenge and the Islamist challenge. For example, the rise of Geert Wilders in the Netherlands is a reaction to acts of theoterrorism such as the murder of filmmaker Theo van Gogh in 2004. Wilders fundamentally still believes in democracy, unlike Islamists who want to destroy democracy. Guiora points out that support for Donald Trump is driven by feelings of marginalization among large parts of the US population.
Cliteur is a proponent of a militant democracy, that fights back against threats to democracy such as Islamist parties trying to use democracy as a tool to achieve power and consequently abolish democracy.
Is it acceptable in a democracy to ban a political party? Guiora urges caution, since any ban will set a precedence for banning more parties in the future.
How far should a free society be allowed to go in fighting terrorism? Guiora advocates striking the right balance so that – also as a society – you can still look at yourself in the mirror. Cliteur calls for a clear diagnosis by politicians in the Netherlands of the Islamist problem. Religions shouldn’t be given any special status, whatever claims to universal truth its adherents may make.
Cliteur and Guiora both warn against complacency in the fight against extremism and terrorism. Governments need ‘to look the tiger in the eye’.