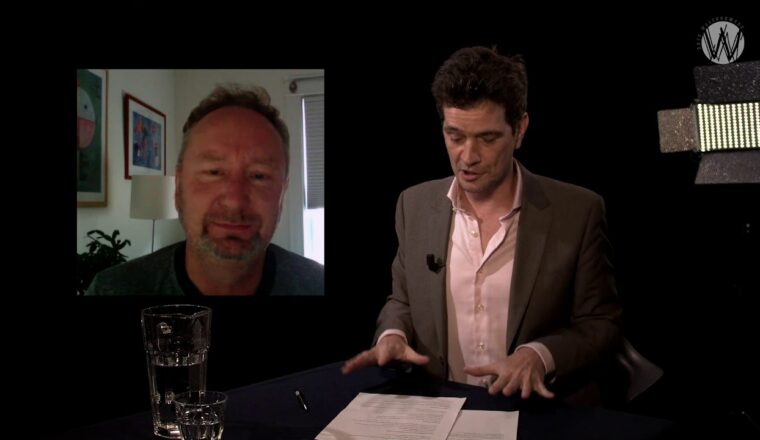 We were very happy to have Mark Blyth as our guest.
Mark is from Scotland and is a professor of international political economy at Brown University in Providence, USA. He is the author of the book ‘Austerity, the History of a Dangerous Idea’. http://markblyth.com/books/austerity-the-history-of-a-dangerous-idea/
Mark Blyth describes himself as a myth-buster, someone who debunks bad economic ideas. In this interview with Coen de Jong he explains how unsound economic policies drive populism in both Europe and the United States.
Everywhere in the western world voters real wages haven’t increased in decades. Since the financial crisis in 2008 average people have paid the bill through cuts to the welfare state while big financial institutions have been rescued by governments.
Mark Blyth predicted in mid-2016 that Donald Trump would win the US presidential election. Voters turned to Donald Trump to send a clear signal that ‘enough is enough’. The same dynamic explains the Brexit vote and the support for right-wing populist parties across Europe and in the Netherlands.
In the European Union Greece has been signaled out as the scapegoat for the Euro-crisis and was punished for its alleged sins. Former president of the Eurogroup and former minister of Finance for the Netherlands, Jeroen Dijsselbloem, accused Southern European countries of spending all the money they borrowed on ‘alcohol and women’. In reality, countries like Germany and the Netherlands bailed out their own banks – that were grossly irresponsible in lending so much money to countries like Greece in the first place – with taxpayers money. The Netherlands especially is a giant version of the Cayman Islands, a tax haven for business, so admonishing Greece for alleged moral failings is hypocrisy.
Politicians in Germany and the Netherlands are obsessed with keeping state debt low, while private debt in the Netherlands is exceptionally high. German chancellor Angela Merkel’s famously said that finances should be run with the attitude of a ‘Swabian housewife’ in mind. Mark Blyth compares this to asking you cat for medical advice. What the EU needs according to him is a fiscal policy, instead of obsessing over state debt and leaving it to the president of the European Central Bank to try to kickstart the economy with monetary policy.
Public sector borrowing and public sector investment are actually what is missing in Germany and the Netherlands. The EU-strategy of ‘saving your way out of a recession’ is fundamentally unsound, as poorer European countries such as Italy or Greece will never be able to generate economic growth by slashing public spending. What is needed, according to Mark Blyth, is some form of a ‘New Deal’ to restructure the poorer areas of the European Union and to transform the economies of the rich countries in the North-West of the EU to make them future-proof.
Mark predicts tough times ahead for the UK if a Boris Johnson government opts for a Hard Brexit, with the car industry pulling out of the UK. The economic ideas of Labour leader Jeremy Corbyn – a left-wing populist – are not as radical-left as they are often portrayed. Many of these ideas would have been perfectly acceptable in the 1980-ies and are actually sound.
In the United States Donald Trump stands a good chance of getting re-elected since unemployment is low and his supporters will come out to vote for him no matter what. Impeachment procedures will only fire up Trump’s supporters even more.
The Democrats are still unwilling to address peoples real problem, obsessing instead over ‘culture wars’. A economically progressive candidate like Bernie Sanders could beat Trump but the Democratic establishment prefers candidates that favor Wall Street.
Finally, Mark recalls that Adam Smith – often seen as the philosopher of unrestrained free market capitalism – actually stated in ‘The Theory of Moral Sentiments’ that even in economic life we should try to be good people.

“Don’t push me, cause I’m close to the edge…” -Grandmaster Flash & The Furious Five